Recapping what has been a busy year, one filled with the usual mix of things … some interesting guest lecture-type gigs, a few conferences, a set of ‘lecture tours’ at the World Press Photo exhibition in town, a new research project last Spring bringing together interviews and participant research … here’s the recap of 2018 in terms of research publications and output.

Overall and going forward, I keep trying to explore the things that intrigue me about digital journalism and, in particular, examining what is happening on the edges of the journalistic field. This is something that continues to fascinate me, makes the work interesting, and which continues to present interesting challenges. In the year ahead, I hope to grapple with a few of these particular challenges more thoroughly (I am particularly interested in considering what gaps I’m stepping over, and where ideas I’ve started to explore – or notions I’ve introduced – could be developed more fully, and to start revisiting some of the incremental conclusions I’ve posited in the past few years).

On my way towards doing so, here’s what I’ve been up to… 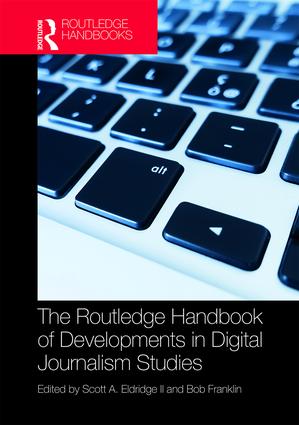 a unique and authoritative collection of essays that report on and address the significant issues and focal debates shaping the innovative field of digital journalism studies. In the short time this field has grown, aspects of journalism have moved from the digital niche to the digital mainstay, and digital innovations have been ‘normalized’ into everyday journalistic practice. These cycles of disruption and normalization support this book’s central claim that we are witnessing the emergence of digital journalism studies as a discrete academic field.

Essays bring together the research and reflections of internationally distinguished academics, journalists, teachers, and researchers to help make sense of a reconceptualized journalism and its effects on journalism’s products, processes, resources, and the relationship between journalists and their audiences. The handbook also discusses the complexities and challenges in studying digital journalism and shines light on previously unexplored areas of inquiry such as aspects of digital resistance, protest, and minority voices.

This was a follow-up project which Bob and I started developing while wrapping up the Routledge Companion to Digital Journalism Studies, realizing as we finished proofs and final edits of the 60 chapters in that volume that the pace of change, and the breadth of amazing work out there, opened up an avenue for another collection where we could bring together colleagues working in this arena, offer them space and an editorial brief to examine the questions that intrigued them, and further examine what’s going on in Digital Journalism Studies. While daunting – two volumes, around 100 chapters to edit, spanning more-or-less four years from first proposal to second publication, it has been an enjoyable labour, but a labour all the same – these were really exciting and really enjoyable projects to work on.

Along the way, this past year, there were also a few journal articles that came out – and a special issue of the Journal of Applied Journalism & Media Studies, which Marcel Broersma and I edited.

Last Spring, while visiting Vienna, I was a guest on “Beyond the Ivory Tower”, a podcast hosted by Sandra Banjac and Phoebe Maares at the University of Vienna’s, Journalism Studies Center. We talked about all sorts of things about journalism, journalism research, why I continue to think it’s important to research ‘jerks’ online challenging our ideas of journalism, and what I would like to see as researchers develop new work. It was fun, and worth checking out:

In January I became one of three new Associate Editors for the journal Digital  Journalism. While I had worked as Reviews Editor for the journal following its launch in 2013, when Bob Franklin stepped down from the journals he edited in January, he passed the reins over to Oscar Westlund as Editor in Chief of Digital Journalism. Alongside Kristy Hess, and Edson Tandoc as fellow associates, it has been a busy year learning the ropes, but exciting to be in the middle of an exciting field.

There’s been a mix of other things, which I won’t belabour but enjoyed being a part of, including being nominated as a Faculty of Arts lecturer of the year, giving some lecture tours of the World Press Photo exhibition in Groningen, and giving another in the Trending Topics lectures for the Dutch Research Master in Media Studies. I’m sure I’m glancing over some things, and will add in if things spring back to mind.

In March, I will head to Norway as an OsloMet Digital Journalism Research. I’ll be particularly looking forward to this visit, as I’ll get a chance to collaborate in discussions with Valerie Belair-Gagnon and Avery Holton. Each in our own ways, we’ve been working in similar research realms, exploring how non-traditional actors, non-journalistic actors, and other types of ‘strangers’ have been challenging existing ideas of journalism. (NOTE: I would be remiss if I didn’t give a shout-out to Avery and Valerie’s review of my book, which is a thoughtful and generous reflection on that project).